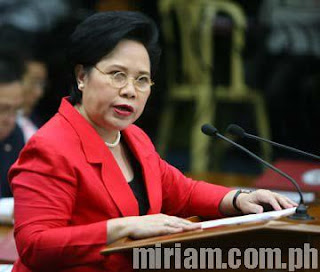 Sen. Miriam Defensor-Santiago shot down the statement of Senate President Juan Ponce Enrile that life begins when a man produces a sperm and a woman produces an egg.

During the resumption of the debate on Senate bill 2865 or the reproductive health bill, Enrile said, "There is life already [in the sperm and the egg] but not yet a human life because a woman cannot produce a human being without the sperm of a man, and a man cannot produce a human being without the egg of the woman so these elements on their own have life."

Santiago urged the Senate President to reconsider his stand. "If it is the position of Sen. Enrile that a sperm has life, of course, if a sperm has life, then that life should be protected. Therefore, in logic, when a person masturbates and releases all those sperms for nothing, he commits murder? Let's think about that."

The two female legislators cited reports saying that there is no consensus in the scientific community on when life begins. Because of differences in meaning, some critics of the RH bill argue that contraceptives are abortifacients, but supporters of the measure deny this.

To resolve the debate, Santiago said she and Cayetano are open to adopting a working definition of conception only for the purposes of the RH bill, and not as a medically prescribed definition.

Cayetano pointed out that even members of the 1987 Constitutional

Commission failed to reach an agreement on the meaning of conception.

Sen. Panfilo Lacson, meanwhile, expressed opposition to allowing the use of so-called morning-after pills. Even he is a co-author of the bill, Lacson said he will withdraw his support for the measure if it includes the pills in the family planning devices couples can choose from.

"Because to me, if there's possibility of life, I don't want any contraceptive to interfere. Because no one will know after sexual intercourse if there's life. The man and the woman who engage in the sexual act will not know," he said.

Cayetano sought to address Lacson's concern. "This is a non-issue because the morning-after pill is not a registered contraceptive."

Sen. Aquilino "Koko" Pimentel III, who is against the RH bill, also said he will raise questions in the upcoming sessions about the use of intrauterine device or IUD.

The Senate is debating the RH bill, which has yet to hurdle second reading. The bill so far has an equal number of supporters and critics in the chamber, with many senators still silent about their stand on the issue.
The interpellations will continue on September 26, Monday.